For anyone in our community, I now have two custom worlds set up, if you are Fallout 1st you can use them even if I’m not online, and if you’re not, well, I’m online a LOT!

Clown Hell is set up for a survival mode, no fast travel and set to more difficult levels!

Clown Builders is set up with relaxed build locations, relaxed build rules, no costs for building or crafting, and infinite ammo!

I’ll be keeping these two, so if you start a new character or clone a copy of yourself over there, the progress there will be recorded!

I may make small changes to the config, depending on how it goes, but if you’re on my friends list, feel free to use my custom worlds any time you’d like!

Welcome back to Inside the Vault! In case you missed it, we’ve put together a video that will help you get caught up to speed with our Fallout Worlds Update, which arrived last week. In addition, we’re sharing information on the “Hunt for the Treasure Hunter” event that begins a little later today. Catch all the details below. 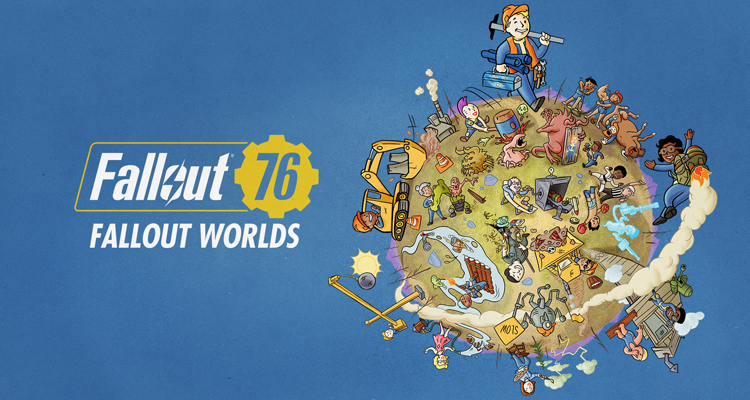 Last week, we launched the Fallout Worlds Update for Fallout 76, which brought new ways to experience Appalachia and much more to the game. Since then, we’ve had a blast joining Public Worlds with you, tuning into community videos and streams as players tinkered with Custom Worlds for the first time, ranking up on the new Season Scoreboard, and storming Daily Ops alongside you during the first Double Mutation Weekend. In case you haven’t logged in since we released the patch, we’ve put together a highlights video that you can watch to catch a crash course on everything that arrived with the Fallout Worlds Update.

If you’re still hungry to learn more, you can head to Fallout.com to read through our detailed Fallout Worlds Update Notes, or visit the Seasons page to catch a look at the new rewards that are up for grabs when you join The Unstoppables and rank up on our latest Scoreboard.

While Fallout Worlds has only been live for about a week, we’re already hard at work on two more patches that we’re planning to release for Fallout 76 this year. We’re currently aiming to release the first of those in October, and it will be focused on bringing some spooky Halloween fun to the game, as well as a new wave of bug fixes. The second is our December Update, and alongside new game content, we’re also going to implement a variety of community-requested quality-of-life improvements. Currently, we’re hoping to kick off our next round of Public Test Server playtesting for the December Update in early Autumn, and we’ll have more details to share with you about both updates in the coming weeks.

HUNT FOR THE TREASURE HUNTER THIS WEEKEND!

Can you feel that? Those tremors beneath your feet can only mean one thing—Treasure Hunter Mole Miners nearly ready to breach the surface of Appalachia! We’re not sure why they’re scavenging the Wasteland for valuables, but they certainly aren’t up to anything good. Dwellers, it’s up to you fight off any Treasure Hunters you spot during your adventures this weekend, reclaim the gear they’ve plundered, and send them fleeing back underground. As always, whenever you take down a Treasure Hunter Mole Miner, you’ll be able to claim a Mole Miner Pail that you can open to claim their loot for yourself. If you’ve got some extra Caps to spare, you can also visit vendors around Appalachia to pick up some Empty Mole Miner Pails. Stop by a Tinker’s Workbench to fill your empty Pails, and then open them to get even more goodies.

We’ve added several new rewards to the “Hunt for the Treasure Hunter” loot pool, including the Cursed Sickle weapon, as well as new plans for items you can build in your C.A.M.P. So, be on the lookout for Treasure Hunter Mole Miners to maximize your chances at getting the new rewards before the event ends on Monday. Here are the exact start and end times:

Until next time, we’ll see you in Appalachia.

There’s my preview for the week, and here’s the Bethesda article!

Read on to catch a preview of the latest and greatest items and offers that are currently available in the Atomic Shop, including this week’s free items.

Visit the Atomic Shop each day to claim a different reward, like consumables, in-game currencies, and more. Each of the items below is available until 12:00 p.m. ET the following day.

Some items from last week are still available for a limited time.

Some of our favorites have returned to the shop for a limited time.

Be sure to pick up anything that catches your eye, because these items will only be available until 12:00 p.m. ET on September 21.