Recently, while reading another article about the far-right and the nasty people who are part of their social spheres, I came across this website which has been archiving discord posts from some very nasty people, and letting people search the archives.

So what I decided to do is take my old list of discord ID’s of Fallout 76 players who were banned from my discord for harassing me, and run that through their search engine.

This is the person who originally found my home address, phone number, and name, and spread it to all of his friends. TheGeminaii – Leader of the “Dupers R Us”. He hunted me down, and spoke to my BROTHER on the phone, in an attempt to harass and intimidate me out of a video game – amongst other things. As we can see, he’s got about 400 posts listed on this account – and we all know he has multiple accounts. This is just the one that was banned from my discord.

Anyways, if you’d like to see more, it’s all publicly available here on this website – this is TheGeminaii – of Fallout 76.

This little psychopath spread my home address, my brother phone number and my name on a lot of discords, on twitch, on twitter, on YOUTUBE even where they tried to blame hacks on me. This guy is a menace to society.

Here’s TheGeminaii’s friends in the ‘duper group’ he ran in Fallout 76. 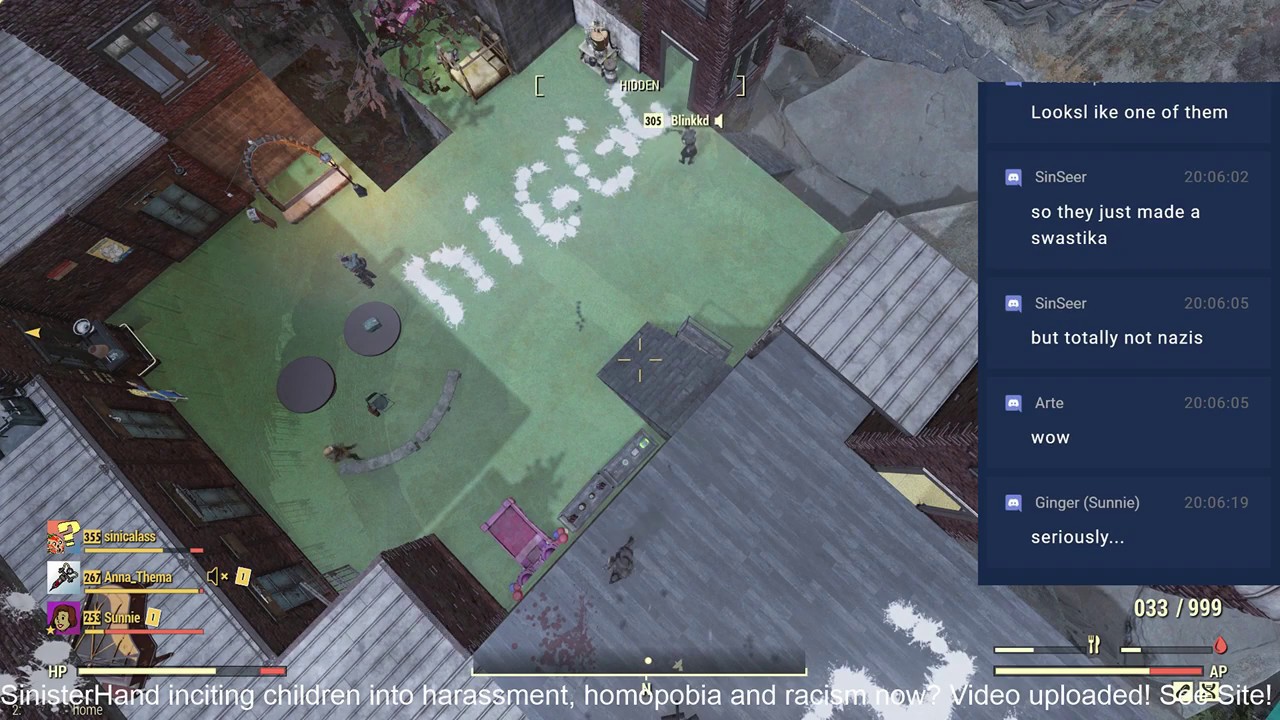 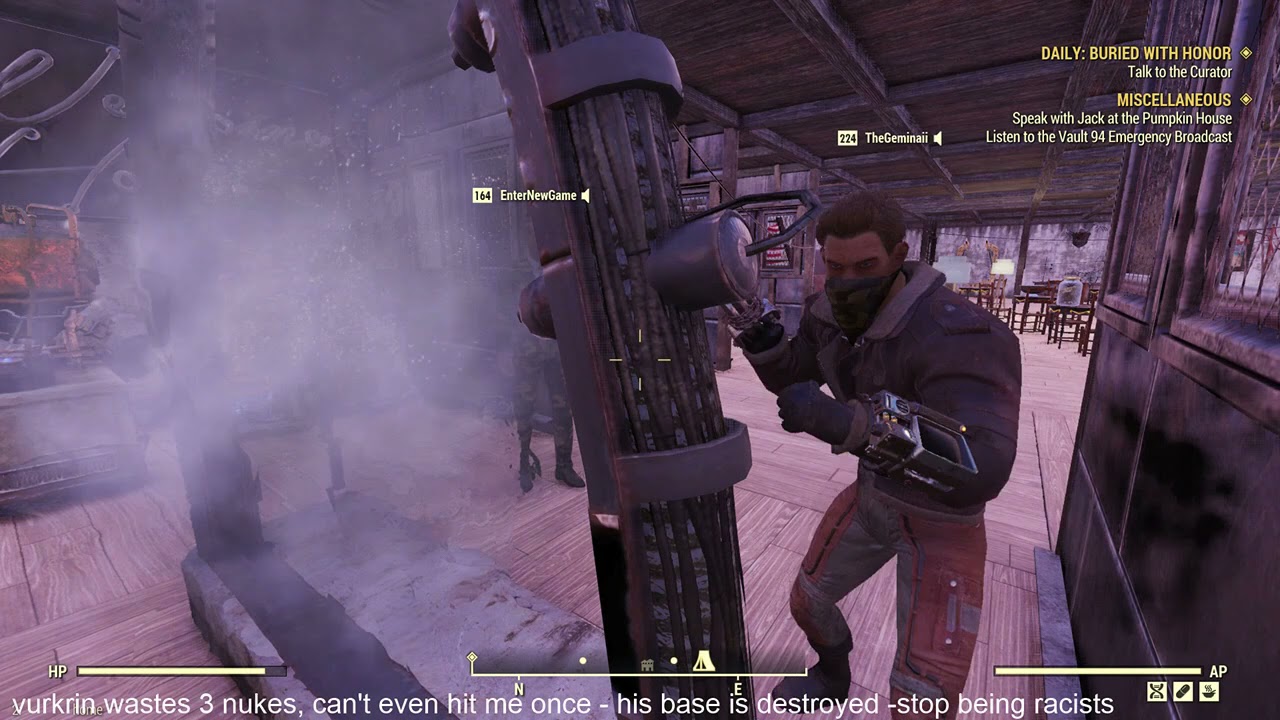 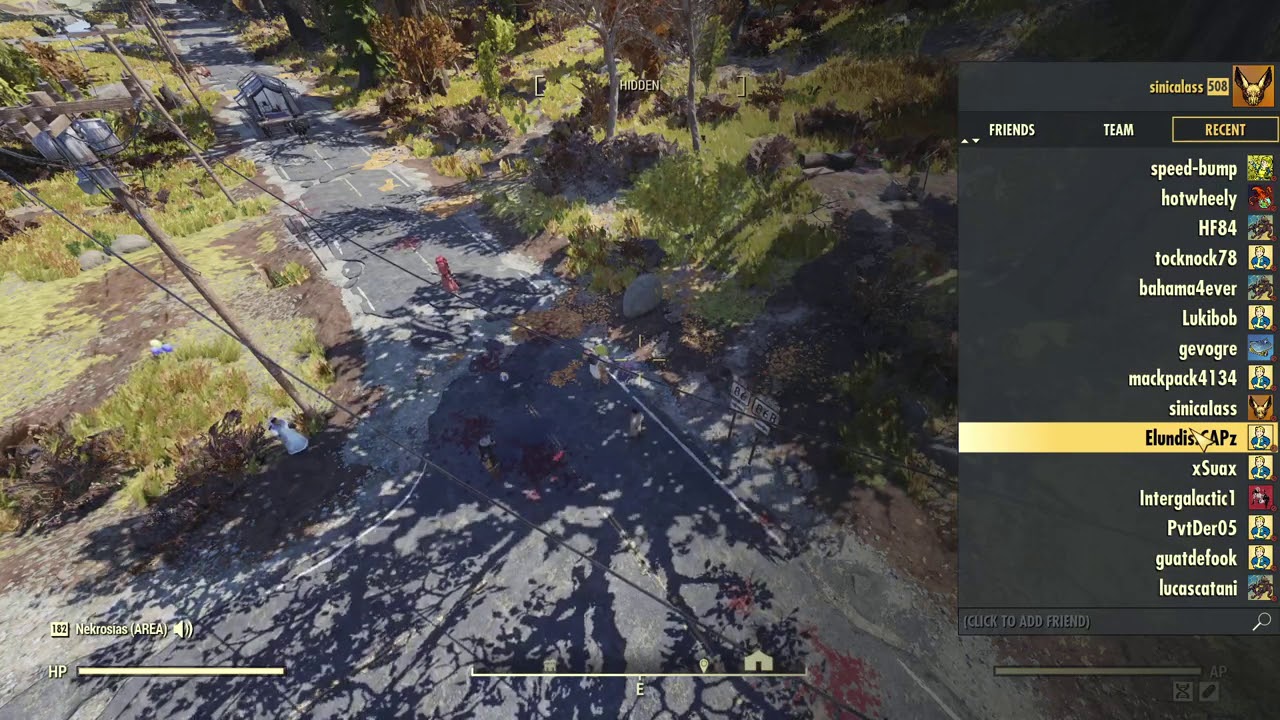 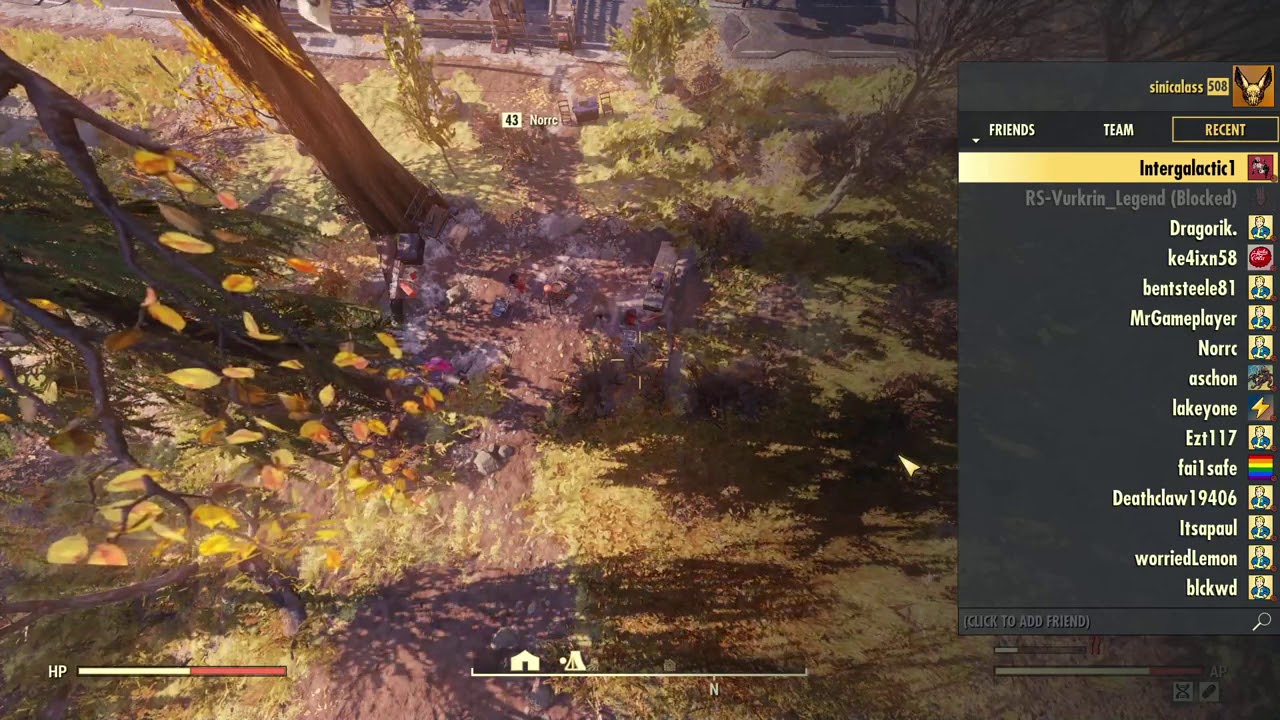 I have been stalked, doxxed, harassed so much we had to change our phone number. This far right, racist duper group that infested Fallout 76 since day one is responsible. This particular person is responsible for most of it. He spread the information.

He also provided MANY people with duped and hacked items, so he was ‘everybodies best friend’ – so when he and his friends made impersonator accounts to try to make ME look bad, the community believed them.

I think they’re horrible people, I think some of them are still involved with the real money duper trade, and I wish Bethesda had stepped harder on them, when they had the chance.

All of this is public information. All Bethesda had to was listen.

Ah, the dupers in Fallout 76 are such pleasant people, I sure wish Bethesda would ban some, but they never do…

16:57 Start here -It takes only 17 mins before the Racist Dupers Server hop enough to find me!
17:05 Cheater is using ESM or something external to cheat and fly
17:07 smallba||s speaks – one of the racist trans hating dupers appears!
17:20 Closing my store, dupers don’t get to shop here.
17:41 Cheater in the air fires weapon again
18:27 CMT-Sussy and smallba||s from racist trans hating duper group on open recent list
20:38 Removing smallba||s the duper from my team with a block.
23:56 CMT-Sussy using Jetpack cheat to fly
26:40 JohnMcafee shoots me with vox dart – another broken exploited weapon in this game
28:25 JasonWolf shows up at my CAMP
29:29 JasonWolf says “stop being a ‘n-word’ and team up with me'”
29:34 JasonWolf continues with racist and homophobic slurs
29:57 Jasonwolf also doesn’t like “Jews” and likes Hitler
30:17 Jasonwolf cheers “Bro! White Power!”
30:27 Jasonwolf screams “Fuck “N-words” over and over again
31:31 Reporting Jasonwolf for his racist and homophobic outburst
31:40 Jasonwolf starts chanting “tranny, tranny, tranny”
31:51 Jasonwolf talks about vaccinations and uses more racist slurs
32:52 Jasonwolf starts chanting ‘fuck n-words’ then starts with antivax nonsense
33:00 Muting Jasonwolf for being a racist trans hating white power troll
34:31 JohnMcafee Speaks
37:09 “Flying” cheat in use again
38:29 ShiningHero aka Shining Eternity (Youtube content thief) logs in

Another loser duper named algosaur used to ask me about bobbypins, I guess he’s still involved with this group? No idea why they are so weird about bobbypins, but their racism and homophobic screams in public voice chat is more of a problem – right in the forest, the first place a new player goes to is usually my place, where I give them an explosive bow, and a recon rifle, some food, and send them on their way.

Except these hateful racist cheaters keep crashing my servers and spouting garbage like this.

This guy will babble on forever if you let him, and that’s annoying, so let’s just mute this little toxic hateful doxxer now, before he screams out my name and address.

50:16 gassoy38 calls me ugly and tells me he wouldn’t fuck me.
50:37 gassoy38 admits using multiple accounts to harass me

I’m tricky sometimes, I wanted to see if foodbuild_supreme started saying anything thinking he was ‘safe’ since we was muted, I mean, I’m on a delay for this very reason. So I unmuted him here.

00:00 Fallout 76 Dupers Stalk to harass and be toxic again – they crash the whole server!
05:43 Mr.Nomad “Who wanted me to answer your question?”
05:54 Mr.Nomad asks If people are twins, and it was ironic that everyone was talking shit about sinseer
06:10 Mr.Nomad thinks I’m a douchebag, so we can block him he’s toxic
07:55 VI-Brand_Onion speaks “Enjoying the Show…”
13:39 Rammstein2070’s Duped Magazine Collection

Notice how Rammstein2070 is higher in the recent list, that means they logged in after all these dupers – I mean, COULD be a coincidence, there’s TONNES of dupers in this game, and how very strange how often I run into the same group!

18:05 Rammstein2070 (sells duped mags at the Duped Mag Store), Dark_Night, RedfoxOWS, VI-Brand_Onion, annabelley35 and SnuggleFuzzle appear to be hanging out at my camp with no store to harass
18:40 VI-Brand_Onion speaks as part of harassment campaign – “You could at least run power to these clowns”
18:44 VI-Melvicious speaks with fake voice, blocked, cowards not welcome to speak. “I know, why aren’t they moving”
18:51 VI-Melvicious “Is this person offering to sell cheat weapons? That’s against TOS”

No, that’s what you tell people though, you always lie about me. Coward Psychopath with the voice changer software. I mean, why do you think I use it sometimes now too – because you people are complete and utter psychopaths who will do anything you can to ruin people in real life, all so you can bully someone you don’t like. Guess maybe someone already recorded you being naughty huh? Or was it me? Is THAT why you hate me, psychopath?

Fix your social system Bethesda, people are abusing it to harass those they don’t like out of the game.

39:20 SnuggleFuzzle Speaks “Cats? Why did you kill the Cats?”
41:00 SnuggleFuzzle Speaks “I don’t like Clowns” – then why are you at my camp for so long, there’s no store, do you know these dupers harassing me?
42:27 Unmuting VI-Melvicious
43:03 VI-Melvicious speaks “Did you just kill somebody? Voice Changer
43:06 VI-Brand_Onion speaks “Maybe”
43:45 SnuggleFuzzle questions why using a voice changer?
43:47 VI-Melvicious explains why they use voice changer software to hide their voice (griefers do it a lot)
44:17 SnuggleFuzzle speaks “I devour souls” Hey we have something in common then!
45:08 SnuggleFuzzle asks again “Okay in all seriousness, WHY are you using a voice changer?” (It’s me. it’s to harass Me)
46:02 VI-Melvicious “You’re running in too much here with the natives”
46:10 VI-Brand_Onion “It’s for the jugalos”
46:50 SnuggleFuzzle “So Hey, Mel, who is the person base, I don’t like clowns, it’s kind of scary” Then why are you there?
47:33 VI-Melvicious suggest something about cheat weapons and how I said it – Well, I close my store if I see cheat weapons, yes, there’s a sign.
47:45 VI-Melvicious tells SnuggleFuzzle I wanted a clean Mr Fuzzy Suit – Unobtainable, which these dupers provide to people for real money. No, I don’t want it. Liar.
49:46 Pixie+ Shows up at my Camp – Why? There’s no Store.

Could just be a lookey-loo, but yeah, I’m turning off the whole icon for the future, woops, I actually thought it was already set that way!

Youtube informed me about the copyright infringement, and I removed his video, recently!

51:09 SnuggleFuzzle greets VI-Brand_Onion, who offers her more Radaway
53:55 SnuggleFuzzle speaks again to VI-Brand_Onion, looking for Clown Outfits
54:41 SnuggleFuzzle “Damnit Dark, shut up over there”
57:10 Skvllkid again visits my Camp while blocked – that has No Store, No Public Icon
57:45 Open Recent List
59:50 Server Crashed by Fallout 76 Dupers AGAIN! They make any server I use unusable, when they stalk me down every day. 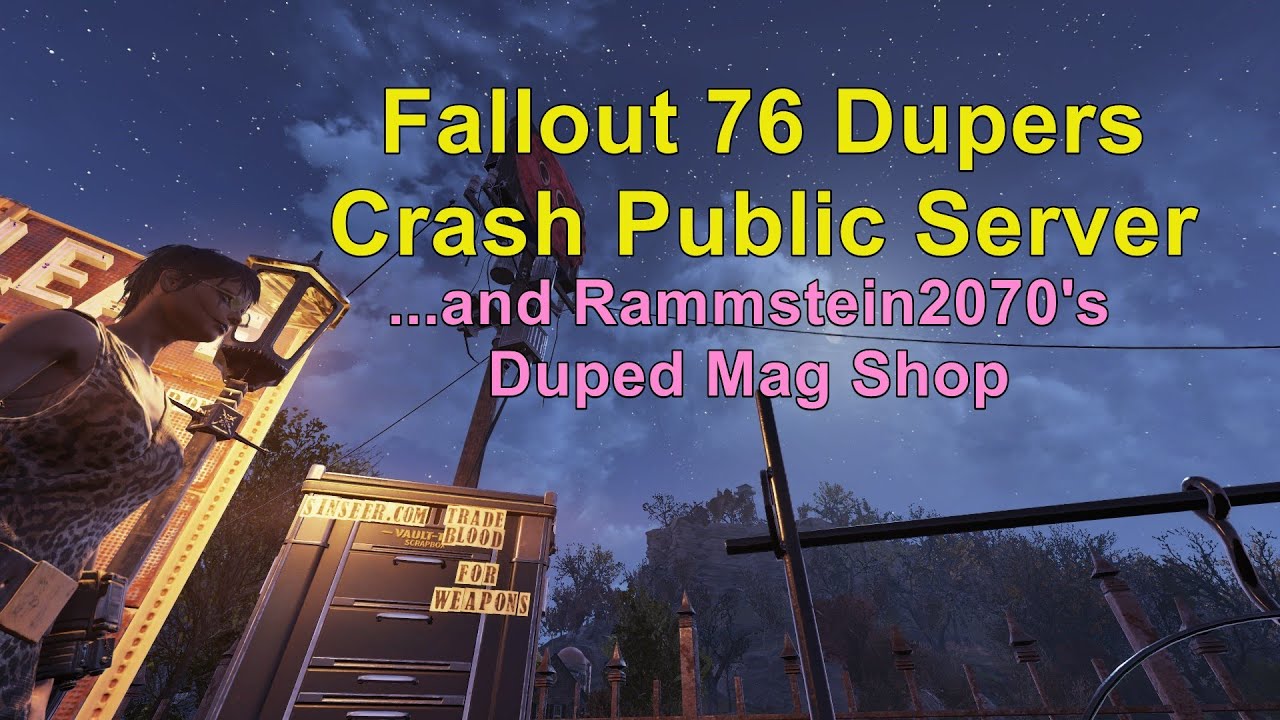