As Fallout 76 is a game known for technical issues, please understand that the bugs that are covered in this post may or may not get fixed for a while. Pet taming as of patch 13 (AKA game version 1.2.3.13) is a tricky process and pet care as of patch 13 is necessary. With this in mind, please plan accordingly as losing a pet to a bug is a definite risk in the current state of the game.

Have you ever wanted to have your very own wasteland creature/animal to enjoy as a C.A.M.P. companion or as a loyal and hardened guard-dog to guard your things from those pesky super mutants? Well believe it or not, you actually can! 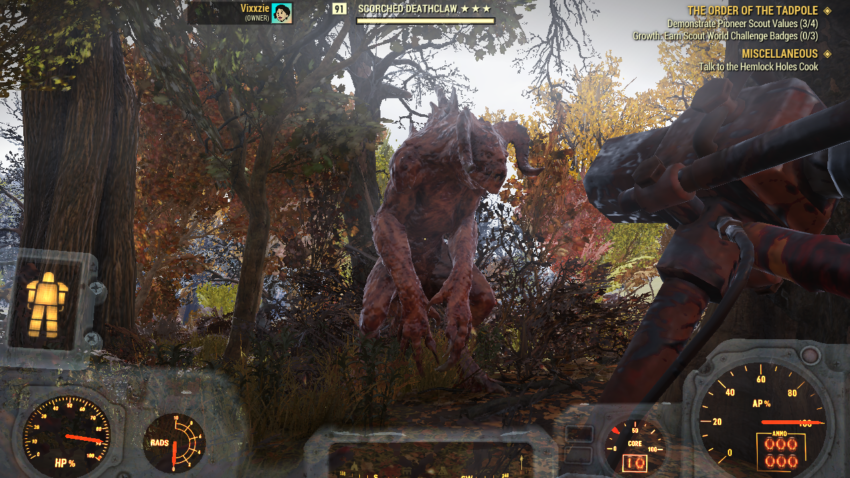 This text is meant to guide you through the steps of obtaining your very own tameable creature/animal (from now on will be referred to as “tameable”) as well as maintenance and care for your new buddy.

Before even beginning the selection progress, you need:

And optionally to pacify creatures:

To figure out if your tameable is a creature or animal, refer to the table in the “Selecting Which tameable to Hunt for” section.

You want your pet to live a long and happy life, right? Choosing where you want to place your C.A.M.P will also choose how long your tameable will survive and their likelihood of being killed while in combat.

Because C.A.M.P. attackers scale to the region (Forest, Ash Heap, Toxic Valley, Savage Divide, Mire, Cranberry Bog) it’s incredibly important to figure out which region you want to put your C.A.M.P. at when thinking about what type of pet you want.

All of the tameables that have a very high chance of getting killed by attackers should be located at a C.A.M.P. location in the Forest, greatly increasing the longevity of the tameable.

All of the tameables that have a medium chance of being killed by attackers can be kept at a C.A.M.P. located in the Ash Heap, Forest, Toxic Valley and Savage Divide.

All of the tameables with a low chance of being killed by attackers can be kept at all locations apart from the Cranberry Bog and certain locations in the Mire.

You may be asking, “Why can’t I keep a pet in the Cranberry Bog or certain locations in the Mire”. It’s quite simple really:

It doesn’t matter what your pet can handle, unless it’s a particular type of tameable that will be discussed in a special subsection in the next section, having your pet near scorchbeasts and high level enemies is a surefire way of getting it killed or transformed into scorched versions that never stop rampaging around your C.A.M.P (they don’t do any damage to anything you’ve built though).

You will note that the table in the next section lists the likelihood of the tameable to be killed by C.A.M.P attackers. This likelihood is based on attackers from the Forest region so expect the survivability of tameables to decrease when going to more dangerous areas.

Selecting Which Tameable to Hunt for

Remember, you can only have one pet at your C.A.M.P. at a time, so choose wisely. Here is a table of all the confirmed tameables in the game with their advantages and disadvantages:

These are very rare high level variants of several of the tameables on this list. Their advantages are that they’re trophy pets, immortal and immune to permanently disappearing due to bugs. Their only downsides are their propensity to either be highly aggressive to C.A.M.P. objects or to be stuck in a half aggressive half passive animation loop which makes it hard to get them to come home with you once you’ve tamed them or to patrol normally around your C.A.M.P. Once these behaviors are fixed though (through the following subsection) the downside becomes that they do not defend your C.A.M.P at all.

The solution for scorched variant behavior: Once your pet has been tamed, immediately pacify them. This will fix their animations and stop them from rampaging around your camp. This is a process called Hard pacification, because it turns them into pacifists and helps their resistance against bugs.

Very important: If your animal wasn’t scorched when you tamed it and it becomes scorched, there is a good chance you can do nothing about its rampaging.

There are sparse and unconfirmed reports of non scorched high level tameables spawning. These are even rarer than their scorched variants and are considered by many in the pet owning community to be the “gold standard” for pets as their high survivability makes owning them less maintenance heavy. High level pets with stars are practically immortal. They are not immune to bugs however. 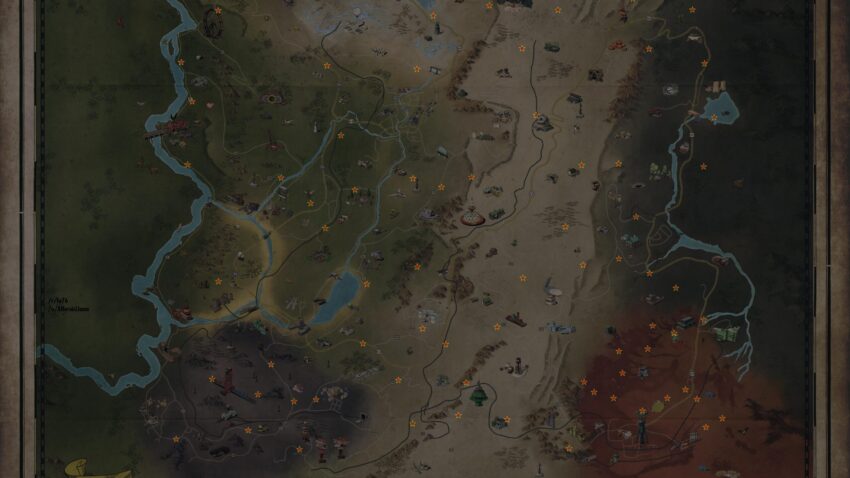 Tameables can be found as gold stars on this map but I frequent Cranberry Glade as the random encounter hotspot is right near the fast-travel spawn. Once you spawn and turn your view to the right, you will be greeted by a parking lot which serves as the scene to a random encounter that will almost always spawn, insult bot as an example. Remember that tameable spawn locations (TSLs) are leveled so you’re more likely to find higher leveled pets in the Cranberry Bog TSLs than at TSLs in the Forest.

Here are two major things you need to keep in mind:

Once You Meet Your Tameable:

After equipping both perks, run up to a tameable animal. For sloths you will have to get up close to do this. You will then be given a button prompt to either tame or pacify. You need to be at minimum, the same level as the tameable you’re taming. They do not take up any C.A.M.P. budget and once you tame them, you can take off the perks without losing them and without having them turn hostile.

Do not hit the button for pacify first, there is a chance that you will not be able to tame the animal/creature after it has been pacified.

Hit “Tame” and you should now have a pet. It will say “Owner: Your username” next to the name of the animal when hovering over it with your crosshair. Your next job is to escort it to your C.A.M.P. which can be tricky as high level enemies may spawn.

If you don’t want to escort it to your C.A.M.P:

A risky shortcut is to simply server hop until you hop to a world where your C.A.M.P. cannot be placed down. Accept that it cannot be placed down and fast travel somewhere to really ensure the shortcut works. Once you do, server hop to another server where your C.A.M.P. can be placed down and fast travel there. If your pet is still not there, either you took too long after it was tamed and it was killed along the way, or you may have to just wait some in-real-life time for your pet to arrive.

This shortcut is risky because while the shortcut may work, your pet may not make it to your C.A.M.P. if it is too vulnerable. There’s also a chance this may not work if you’ve tamed your animal/creature too recently.

Escorting isn’t the best way to ensure your pet arrives at your camp as enemies often spawn along the way. Do not plan to tame creatures unless you are willing to risk it dying during escort if escort is your only option.

If you can’t escort it, don’t want to risk the shortcut or don’t want to escort it, another shortcut is to fast travel to your camp and wait for it to arrive. This has around a 10% failure rate so keep this in mind, but it is guaranteed to arrive faster than server hopping.

As a side note, pets load with your C.A.M.P., so long as your C.A.M.P. is not loaded into a world, nothing will happen with your pet. You may resume any part of this process if you join a world but there’s a good chance the pet will have changed position in regard to how far it was away from your C.A.M.P. before you left the server due to the way the game works.

Step 3: Caring for Your Pet

Different types of pets require different type of supervision. All easily killed pets need constant supervision and no, your $5 collectron doesn’t count as a Ms. Nanny. Normal Dogs and Cats are affected by radiation and therefore need to be placed in an area without standing or running water.

You can move your C.A.M.P module to alter your pet’s patrol routine as they will circle around it and occasionally go toward it.

Remember: as of patch 9 or 13, pets do not have respawns. This means that at any point, if your pet disappears or gets killed, you will have to search for yet another one.

As of patch 13, the only non debunked report regarding players able to grief pets is through orbital strikes. Be wary of this but know that it is rare.

Here is proof that explosives from players not on a team, do not affect your pet’s health if you have passive mode on

High level scorched variant pets with stars after their name require 0 maintenance (but not pets that have become scorched after you’ve tamed them). This is why they are so sought after: they never die, their health never drops and

As of patch 13, Oct 8th Maintenance, I have confirmed that no pet is safe from bugs. My three star scorched deathclaw spawned dead and did not respawn.

You should be all set to tame your first animal/creature. Remember all the risks this process entails and be prepared to do a lot of server hopping to get the exact pet you want. Good hunting!