Today’s update for Fallout 76 includes fixes for a number of bugs, many of which were reported by players in the community. Read on to catch the update notes.

Check the download sizes below for today’s patch on your platform of choice:

Source
Hey there, Vault Dwellers! This week, we’re sharing a few updates on the Public Test Server for the Steel Reign update, a revised Community Calendar with a number of weekend event changes through mid-June, and a reminder to share your screenshots for this month’s C.A.M.P. Creations. Read on to catch the details.

Last Friday, we reopened the Public Test Server (PTS) to kick off playtesting for the upcoming Steel Reign Update. Since then, we’ve seen incredible participation from the community, and we’ve already begun reading through all of the thoughts you’ve been sharing with us about the Steel Reign questline, legendary balance changes, and even our new Vendor, “Minerva.” We’ve also seen lots of community conversation about the Legendary Crafting system, and we’re keeping a close eye on those discussions, as well. While it is still early in this phase of playtesting, we are looking to make some improvements in future PTS updates. For example, we’re looking into adjusting some Legendary Core drop rates and permanently increasing the Legendary Scrip limit, to help players more easily scoop up components they need to make legendary items. So, please keep sending your feedback to us on Legendary Crafting, as well as all of the other improvements, content, and features that are headed your way with the Steel Reign Update in July. 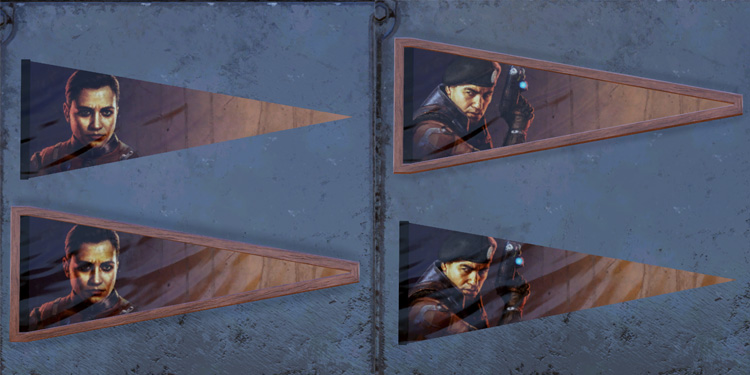 One of the ways we like to show our appreciation for your efforts in the PTS is by giving out special Pennants for your C.A.M.P. in the live version of the game. This time, we’ve got two brand new Pennants that you can earn to show where your Brotherhood loyalties lie—with Paladin Rahmani, or Knight Shin. Unlock both Pennants by completing the following objectives in the Test Server before playtesting concludes in July:

JUMPSTART YOUR PLAYTESTING WITH PREMADE CHARACTERS

To help you dive into playtesting, we’re adding several premade characters to all PTS players’ accounts. Two of them, named “Quests,” will (you guessed it) have their quest progression set to the beginning of the Steel Reign questline. Use one of them to get started with the new story content right away, and the other if you’d like to play through it again. You’ll also get a character named “Rewards,” who has all of the new Steel Reign and Meat Week reward items available, plenty of components to try out Legendary Crafting, and Gold Bullion you can use to purchase items from Minerva. Every Friday, we’re going to do another sweep to add these characters for PTS players who don’t have them yet. All you need to do is log into the Test Server at least once on or before Thursday, and we will get you set up. If you own a PC Bethesda.net copy of Fallout 76, we would love to have you join us in the Public Test Server to try out Steel Reign content, share your feedback with us, and report any bugs you find. Head over to the Bethesda Game Studios Discord Server and drop by the Fallout 76 PTS channels there to join the conversation. 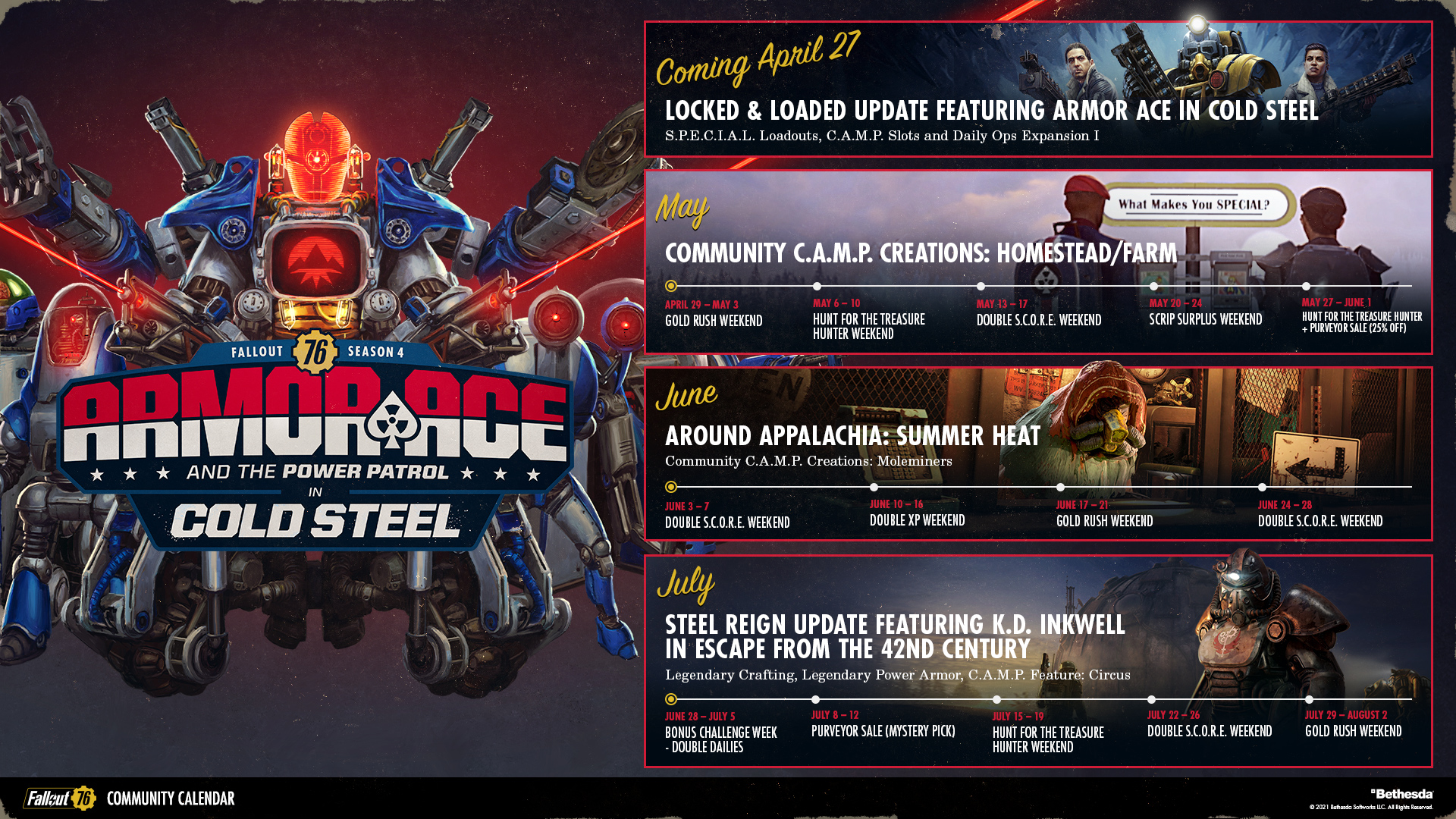 During our most recent “Hunt for the Treasure Hunter” event, Treasure Hunter Mole Miners were quite a bit more elusive than usual. To help make it right, we’re going to run another Treasure Hunter event this month after we address an issue with enemy spawns in an update next week. We’re also adding a Purveyor Sale that same weekend, extending both events by an extra day, and swapping out this weekend’s Double XP with a Scrip Surplus, so that you can pocket more Legendary Scrip ahead of Purveyor Murmrgh’s sale. Even though Double XP has moved back in the schedule, we’re extending it by a few days as well, so that you can squeeze in some extra level-ups. Check out our updated Community Calendar above or on Fallout.com’s Seasons page to make sure you don’t miss any of the action during the weeks to come!

SHOW OFF YOUR C.A.M.P. CREATIONS

Ever since you left Vault 76, you’ve worked hard to carve out a slice of Appalachia that you can call home. Now, it’s time to show it off! Our C.A.M.P. Creations article series offers you chance to have your incredible C.A.M.P. builds featured on Fallout.com, with a new theme each month. This month’s theme is “Farming/Homestead,” so slather a fresh coat of paint on your barn, plant some crops, snap a few photos, and then share them with us in our C.A.M.P. Creations channel in Discord. We’ll wrangle some of our favorite community submissions and then post them for all to see in our next C.A.M.P. Creations article in early June. Until next time, we’ll see you in Appalachia. Source
I’m using some new video software, and most of my videos in the future are going to finally have professional stuff like ‘end credits’ and stuff like that – I wanted to put a little thank you section in for my longest supporters, both long time friends and Discord supporters and current Patreon supporters, but I can also understand why you might not want to be in it! If you’re interested, send me an email or you can use Patreon or Discord! Love, Always, SinSeer