Helvetia’s dutiful Protectrons are gearing up to welcome visitors from all corners of Appalachia in celebration of Fasnacht Day. Read on to learn how you can help them prepare for the festivities, join in some explosive parades around town, and claim some sweet rewards. In addition, we’re sharing how players on Steam can now join us in the Public Test Server (PTS), and we’ve got details on this weekend’s upcoming Purveyor Sale.

It’s nearly time once again to come together as a community as we usher in the warm rays of springtime, and bid a fiery farewell to Old Man Winter. Pull your favorite mask out of storage, throw together a festive outfit, and shine your marching shoes, because the Fasnacht Day celebration begins February 10!

Once Fasnacht arrives next Thursday, make sure to head to Helvetia every hour at the top of the hour to start the event by speaking with the Master of Ceremonies. There, you’ll team up with other Dwellers to aid the town’s Protectrons with their party prep. Decorate the barn, play a tune, gather ingredients for the feast, and more before lining up alongside the bots to take part in the Fasnacht Day Parade. Defend the robots against any would-be party crashers as they march around Helvetia, and then be sure to cap off the parade by lighting the ceremonial bonfire at the end of the route. 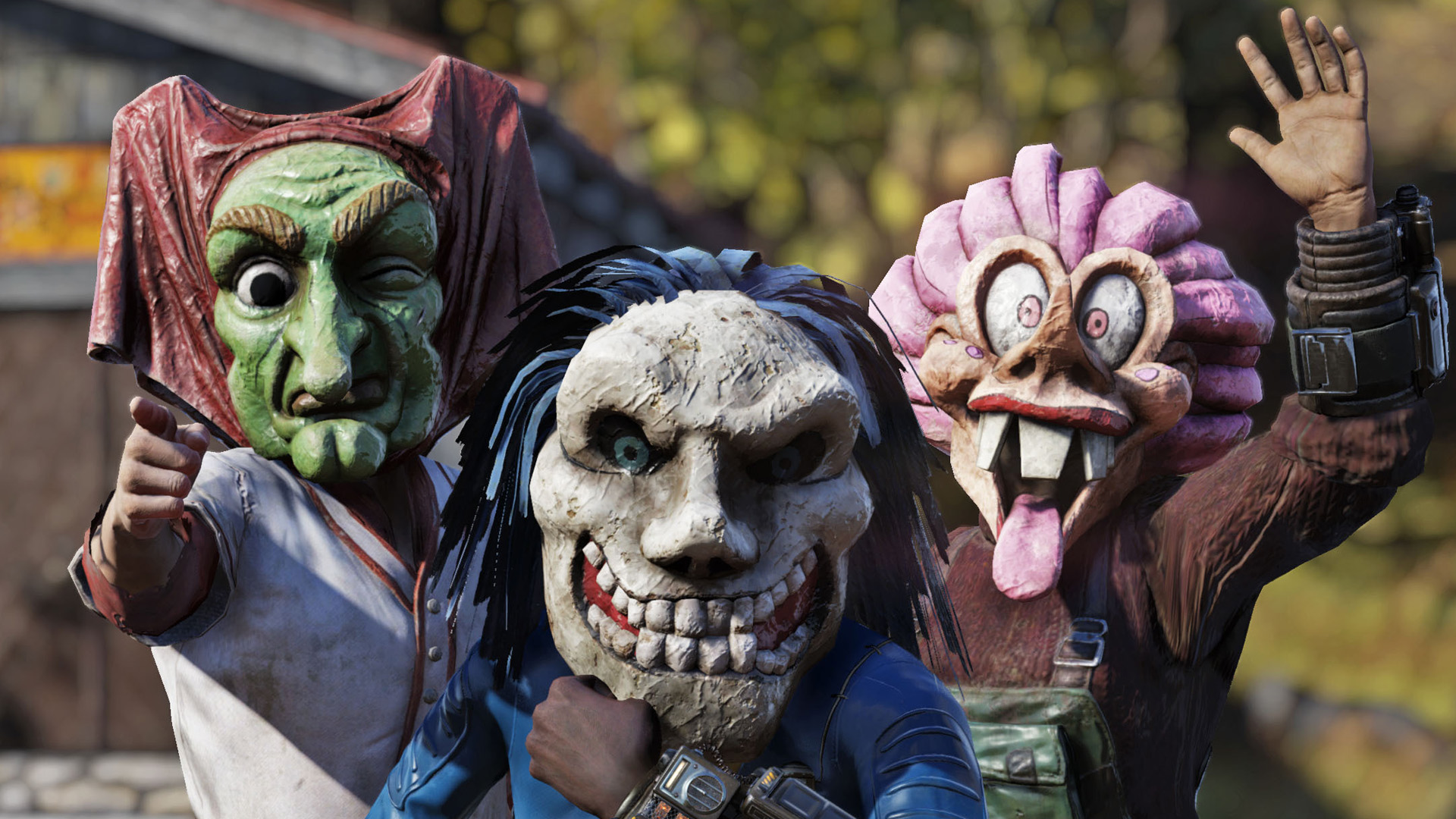 The more Protectron marchers who survive the parade, the better your chances to earn rare rewards. When you complete Fasnacht Day, you’ll earn some loot and a legendary item. You’ll also have a chance to earn rare rewards, like Fasnacht themed gear for your C.A.M.P., or one of many coveted Fasnacht Masks, including a few new rare Masks that are up for grabs this year.

With a new parade starting every hour, you’ll have lots of opportunities to get your hands on plenty of those rewards. Make sure to join Helvetia’s most explosive party of the year before the Fasnacht Seasonal Event concludes on February 22.

In case you haven’t been keeping up with the latest developments in the Public Test Server, we recently announced that we’ve expanded the PTS to include all of our players on Steam. If you own a PC copy of Fallout 76 on Steam, you can install the “Fallout 76 Public Test Server” client—for free—right now from your Steam Library.

(Don’t forget, you can earn this otherworldly Pennant for your C.A.M.P. in the live game just by participating in the PTS!)

If you’re not sure where to begin with playtesting, keep an eye out for the new “Invaders from Beyond” Seasonal Event at the top of every hour to join the fight against extraterrestrial interlopers. Then, head into the “Happy Builder” Public World to build without collision using the new “object intersection” setting. Until February 7, you can also share early thoughts with us on the “Test Your Metal” Public Event, which is still in development and slated to arrive in future patch after the Invaders from Beyond Update.

You’re welcome to start a new character, or try out the new content with your existing characters, which we’ve copied over from your account in the live version of the game. Once you’ve had the chance to do some playtesting, don’t forget to join us in the official Bethesda Studios Discord Server to post your feedback, discuss the PTS with others, and report bugs. See you there!

We hope you managed to stockpile some Legendary Scrip during last week’s Scrip Surplus! Purveyor Murmrgh’s armory is brimming with gear, and she’s looking to strike up a deal with every patron who walks through her door this weekend. If you’ve been on the hunt for a new legendary weapon or piece of armor, then make your way to the Rusty Pick in the Ash Heap to get 25% off The Purveyor’s standard prices.

Murmrgh will mark down her inventory at 12:00 p.m. ET today, so make sure to add some more legendary gear to your personal arsenal before her sale ends at that same time on Monday, February 7.

Until next time, we’ll see you in Appalachia.

We’ve been hard at work making final preparations to reopen the Public Test Server (PTS) for our next major game update, “Invaders from Beyond”. In this edition of Inside the Vault, we’re sharing a look at upcoming features and improvements that will be available for playtesting in the Test Server. We’ve also got details on this weekend’s “Hunt for the Treasure Hunter” event.

INVADERS FROM BEYOND UPDATE COMING TO THE PTS

A little later today, we’re planning to reopen the PTS so that you can share feedback with us on the “Invaders from Beyond” Update coming in March. We’re eager to hear your thoughts on an out-of-this-world new Seasonal Event, Fallout Worlds improvements, a new Public Event that’s planned for another update later this year, and more. Read on to catch additional details before you dive into playtesting.

“INVADERS FROM BEYOND” SEASONAL EVENT

Otherworldly interlopers are invading our skies and preying on our brainwaves! Every hour on the hour during this all-new Seasonal Event, an alien mothership will hover above a high-profile Appalachian location to deploy Brainwave Siphons. Disrupt their efforts by banding together with fellow humans to destroy any Siphons in the area and show the aliens who’s really the boss around these parts. When you do, you’ll have a chance to earn rare plans to craft new alien weaponry, as well as high-tech additions for your C.A.M.P.

We’ve also received reports that our curious visitors have been spotted at various Public Events, so be sure to keep your guard up as you adventure around Appalachia.

One of the top Fallout Worlds requests that we see from the community is for progress in Public and Custom Worlds to also count toward Adventure Mode. We’re pleased to let you know that, with the Invaders from Beyond Update, you will be able to continue your Season journey by earning S.C.O.R.E. from any non-repeatable Daily and Weekly Challenges you complete in Public and Custom Worlds.

Additionally, we’ve rustled up a variety of new settings for you to tinker with in Custom Worlds. Disable VATS versus other Dwellers, or turn it off entirely, make your enemies explode into a burst of confetti, allow C.A.M.P. objects to intersect with one another, and more!

Please note: “Test Your Metal” is slated for a future patch that will arrive after the Invaders from Beyond Update. However, we’ve included it in this PTS to begin gathering early community input. Give it a try and let us know what you think.

The Brotherhood of Steel recently learned that the Rust Eagles, an offshoot of the Blood Eagles, have been cobbling together a regiment of deadly combat bots from spare parts they’ve scavenged. Scribe Valdez sent a Field Team to investigate the threat these bots pose by competing against them in the Rust Eagle Arena. If they’re going to come out on top, they’ll need a little more firepower—and that’s where you come in. Gear up and help the “Gladiators of Steel” emerge victorious over the Rust Eagles’ robot army. The more Gladiators who survive the Arena, the higher your chances to earn rare rewards, like the new Raider Robot Armor plan.

Extraterrestrials may be arriving with our next patch, but they aren’t the only ones planning an invasion. Treasure Hunter Mole Miners are already digging their way up to the surface so they can plunder the Wasteland all weekend long. Track down Treasure Hunters in all regions of Appalachia and take them out to loot their Mole Miner Pails, which you can open to reclaim some of the riches they’ve scavenged. You can also visit your favorite Vendors to exchange Caps for Empty Mole Miner Pails. Take them to a Tinker’s Workbench to fill them up, and then open your freshly-crafted Mole Miner Pails to claim some more loot.

The Hunt for the Treasure Hunter event begins at 12:00 p.m. ET on Thursday, January 13, and it lasts until that same time on Monday, January 17.

Have a fantastic week, and until next time we’ll see you in Appalachia.

The Night of the Moth Update for Fallout 76 arrives today, and it brings the Mothman Equinox Seasonal Event, Fallout 76 Season 7, a wide variety of quality-of-life and Public Event improvements, and much more to the game. Read on to catch all the details.

Check the download sizes below for today’s patch on your platform of choice:

A group of robed travelers have just arrived in Appalachia, and they’ve taken up residence at Point Pleasant to celebrate a dubious occasion known as the Mothman Equinox. Calling themselves “The Enlightened,” this sect of the Wise Mothman’s most devoted followers plan to summon the cryptid through an elaborate ritual. Aid their dark endeavors and fend off rival cultists to earn the Wise Mothman’s favor!

Former (and self-proclaimed) Emperor of the Universe, Dr. Zorbo, has never forgotten his crushing defeat at the hands of Captain Cosmos during “The Legendary Run.” Now, Zorbo seeks to enact revenge by assembling a villainous crew, who will help him build a massive war machine he’ll use to obliterate the Captain. Here’s what’s headed your way during Fallout 76 Season 7, which begins today:

Catch additional details about Fallout 76 Season 7 by heading to the Seasons page on Fallout.com, or by heading here to read our recent article.

Community feedback plays an important role in how we approach shaping and leveling-up Fallout 76, and we love reading all of your ideas about what you’d like to see added to the game. With today’s update, we’re implementing a number quality-of-life improvements that have been suggested to us by many of you in the community. We hope you enjoy digging into them in-game, and that you will continue sharing your thoughts with us.

We’re bringing a variety of improvements to Public Events through some adjustments to the Public Event system itself, the addition of a reward preview to Public Event map descriptions, and a number of balance change across many of the events that are currently available in-game.

As mentioned above, you can now preview the rewards that are up for grabs at each Public Event directly from the event’s description on the Map.

Previously, some of our Public Events could be a little too difficult, end in failure too suddenly, or even last too long. We’re implementing balance changes for a number of Public Events to help smooth out some of these rough spots and improve the experience of playing through them.

It seems someone out there in the Wasteland has found a way to hijack the airwaves to begin broadcasting their very own Pirate Radio Station! Open your Pip-Boy and tune into the new station to tap your toes to hours of new jingles, and catch a blast from the past with radio dramas and commercials from life before the bombs dropped. The audio interloper behind this rogue station has yet to reveal their identity, and until they do, you can at least enjoy some fresh tunes during your adventures in Appalachia.