SinisterHand trying to again organize harassment by asking the Hackers behind the White Power Discord Group “Dupers R Us” to harass a female streamer – via the Demon Asylum Discord:

Intergalactic1, the leader of the “Bandit Bar” discord which was used to datamine the names, address, and phone numbers of multiple fallout 76 players, so they could be doxxed – admits to working with SinisterHand:

SinisterHand coming to bother me in-game yet again with another Super Villian Speech:

Over the weekend, SInisterHand was banned from the Market 76 Discord. I didn’t see the ban message, but I did see this – a conversation about the ban.

What’s up with SinisterHand “Peddling Exploits”?

I saw this conversation on Market 76 Discord –

When I ask google, it’s first, most obvious definition of that word is:

If only someone had warned the good people of Fallout 76, Market 76, and really, EVERYONE – about this evil person. Uh… have you… looked below this line?

Woops, forgot to add this video with his voice – he knows his video of lies about me could cause someone like me, with severe depression problems, to commit suicide. Him and his friends want this, and have been saying things like this for month.

More threats from SinisterHand – as if it wasn’t bad enough he stalked and harass us for youtube subs and youtube pennies, he also asked his friends to harass us.

Now he’s threatening a ‘tweet’ storm – using his social media influence, yet again – against me.

This is the type of person he is.

SinisterHand – the stalker Youtuber who’s been harassing me for more than 8 months now, shows up in yet another place I’m in – first to insult me, with a long winded gloating message I really wish I caught before it was deleted.. but when that was deleted, you can see him resorting to this.

First off, since he’s friends with so many dupers and exploiters – no wonder he can offer that for so cheap – his friends can just generate a million of them. They all cheat – they MAKE cheat code.

This is actually a tactic he’s used before. He tries to get to the people I’m close to, so he can continue to stalk me in-game.

This is a stalker.

Do not ever add this crazy stalker, or you will have to deal with his psychotic friends, who paint nazi symbols in game, doxx people, and make real life threats – as well as make cheat code, duplicate items, and sell them for real money. 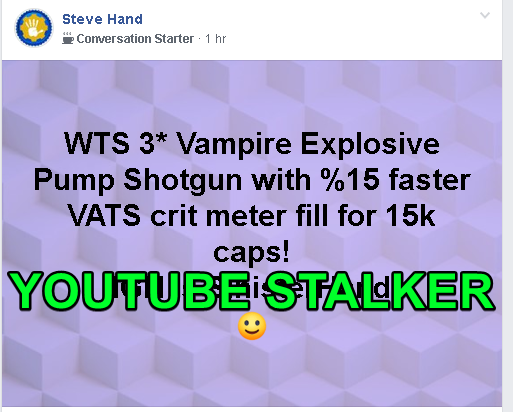 SinisterHand Stalks Me To Yet Another Social Outlet

Of course, everywhere I go, always – a discord, twitch rooms, anywhere – this toxic creep follows me. Here’s his fake facebook account he set up to stalk me on facebook, now. Sigh. As I said – he’s a stalker troll. And very toxic. And he won’t ever, ever leave people alone. It’s been almost a year now, and this creep won’t leave us alone. He’s a stalker, and this needs to stop. 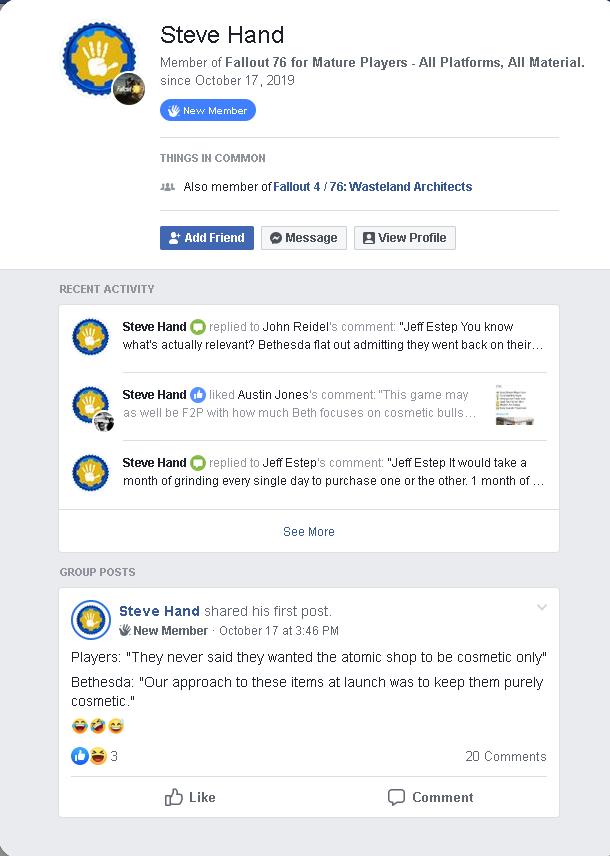 1 – SinisterHand lied when he said he ‘taught me how to stream’.

Please see evidence included in the hours and hours of footage in my “Life of SinSeer” series – Footage from Day One, before I ever met him. Also please see my Fallout 4 Playthrough Series. Again. Way before I met him.

2 – SinisterHand lied when he said I got him “banned from Reddit Fallout Network.”

This second discord he claims I got him banned from, I was not a moderator – I was a trainee moderator – after giving the details of SinisterHand’s harassment of both me and other users on the network, including screenshots of harassing direct messages sent after stalking people to this discord, they chose to ban him. I only passed on the message. Keep in mind, this network was almost dead – there were almost no moderators left, and I did not know this at the time. So I just did what I was told, until I finally got sick of doing all the work for an unknown owner, and left the server anyway.

(more to be added, of course – I do like evidence – he does not like evidence, and likes to lie. If you believed these lies he told about me, then I am very sorry – SinisterHand is a stalker, and he has been running a campaign of harassment against me and my friends for almost a year now.

SinisterHand’s little nazi child warriors – he likes to act ‘behind the scenes’:

Oh… Did I not easily link the video where his child warriors come to paint the nazi swastika the next day? Keep an eye on who is in SinisterHand Rant video below… and then this one:

Please do something – and if you have this creepy SinisterHand on your friends list – do you want his creepy little racist child warriors ruining your fun and having those voice logs connected to you as part of SinisterHand’s little group of pyscho griefers?

SinisterHand mysteriously suddenly active on Market 76 while I’m getting griefed:

Yeah – Looks like I have proof now that Sinisterhand is still the one causing problems, from Market 76 – He suddenly became active again on that discord when I was being griefed by his stalker friends last night. And he made a clip of my twitch stream – trying to make it look like I was the one in the wrong – Silly boy. We have way more video than this.

He’s so stupid – ah well – more proof for the pile: Here’s the timeline: 2:55am my time, that checks out – this slimy psychotic troll is active. Man, Market76 really should remove this crazy griefer. 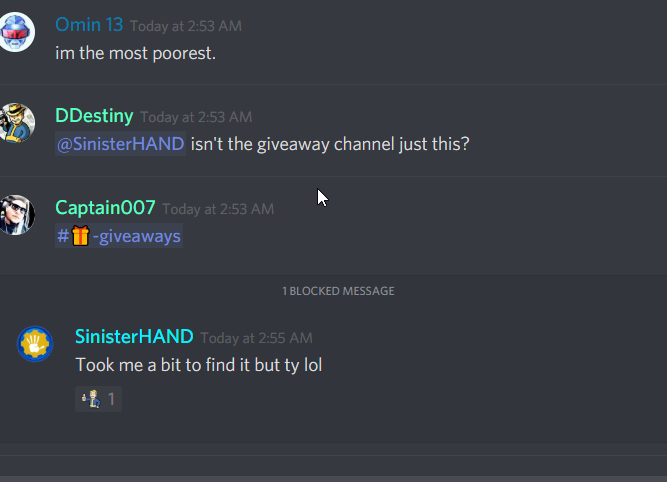 Here’s the psychotic stalker, SinisterHands clip of my own twitch page, where he tries to make it look like I am the problem. Maybe if your crazy fucking griefer troll friends would leave us alone? But no – you just won’t stop, will you? Too crazy for that. Youtube shouldn’t support this psychotic either, this is a form of cyber-stalking, and bullying. He’s a creep, and he needs to leave me alone.

SinisterHands Super Villian Speech  with the homophobic slur – Yet Again:

After repeating stalking attempts in multiple discords, in-game, on youtube, and on reddit, I’ve started to keep a log of the times that Sinisterhand has been stalking and griefing me in Discords, Youtube, Reddit, and inside Fallout 76.  He claims I said ‘something’ about him? I barely think about him – barely knew him. And I don’t know why he’s so obsessed with trying to make me ‘pay’ for what I’ve done. I need help, and I’ve reported to Discord, Youtube, Bethesda – and soon, I’ll have to report him to the police. This needs to stop. Please pass this message along…

This ones an odd one – he stalked me into yet ANOTHER discord, since he’s been banned from 2 others for stalking people to start arguments with them from other networks where he’s banned – so he left this message after his last griefing, when he used such hateful words, that I don’t think have a place in in-game voice chat (see above, it’s too crude) – He seems to be claiming he’s protected by Bethesda.

Here’s him sending yet more harassing messages to me in discord after the video where he used the homophobic slur:

SinisterHand admitting to “NOW” griefing me – and asking others to harass me too:

Here’s him posting a bounty on me, forever, and making more lies and accusations without proof, on reddit  – and admitting that he’s “now” griefing me, of course. Only now.

SinisterHand starting to doxx me.

The next stage of his stalking has him now trying to release personal details on me – this is considered stalking, griefing, and ‘doxxing’:

Since he does like to delete the evidence of his stalking, I took the screenshot – the reddit source is here.

Sadly – it seems SinisterHand has a new home – a Market76 Discord, where his friends are still stalking me (see the main griefer list for those)

I’ve only been paying attention since this latest incident…. but look at these gems: 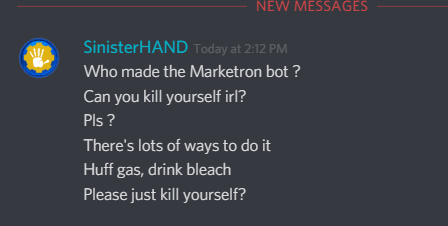 I sure wish someone from discord’s terms of acceptable use policy team would take a look and see if this kind of thing is okay to say in public?

Interestingly enough – my site, which, admittedly is pretty dull – certainly did get a lot of hack attempts today after releasing these videos, pictures, and information.  Better save that IP Log in case one was stupid enough to come in exposed. Interestingly enough – websites have backup options, and this is a simple wordpress site – just to display information – restored in minutes, if need be – not entirely sure why anyone would bother…