Welcome back to Inside the Vault! We can hardly believe it’s already December and nearly time to kick off some holiday festivities in Appalachia. This week, we’re sharing our recent launch trailer for the Steel Dawn Update, as well as a couple of reminders about the new quest content. In addition, we’ve included our updated Community Calendar in case you missed it last time. Don’t forget, you can also get double S.C.O.R.E. rewards from your Challenges until December 8. Read on to catch the details.

TAKE ON THE STEEL DAWN QUESTLINE!

On Monday, we posted a brand new trailer for the Steel Dawn Update, which is now available to all Fallout 76 players. In case you missed the trailer, we’ve included it below so that those of you who haven’t logged since the update can get pumped up to experience the new Brotherhood of Steel questline.

Additionally, following the launch of Steel Dawn, we’ve seen a few questions in the community asking about “Fractured Steel” quests. Originally, we had planned the Brotherhood storyline to release in three parts, spread out over the course of a year. A few months ago, we chose to instead combine the first two parts, “Steel Dawn” and “Fractured Steel,” which we felt would make the Brotherhood’s arrival a more impactful and fun experience. We released them together in last week’s patch, but there’s still more to come! The final portion of the Brotherhood questline, “Steel Reign,” is still planned for release in 2021.

Speaking of quests, we also introduced the “Home Expansion” quest in the Steel Dawn Update, which will net you a free C.A.M.P. Shelter! Find a Shelters Claim Center Poster in any train station, or claim a free one for your C.A.M.P. in the Atomic Shop, to begin the quest and unlock your Vault Utility Room Shelter.

A couple of weeks ago, we posted an updated Community Calendar that covered important upcoming events in November and December. This week, we wanted to share it with you again as a reminder, so that you can be sure you’re up to speed on everything happening in Fallout 76 through the end of the year. We hope you will join the merriment as we enter the holiday season with new Double XP and Purveyor Legendary Sale events, as well as an all-new Season, Scoreboard, and rank-up rewards. In addition, the Scorched will soon be donning jingle bells and festive attire for the return of the Holiday Scorched event, which will last for just over two weeks. Stay on top of all these important dates and more by checking out the Community Calendar below: 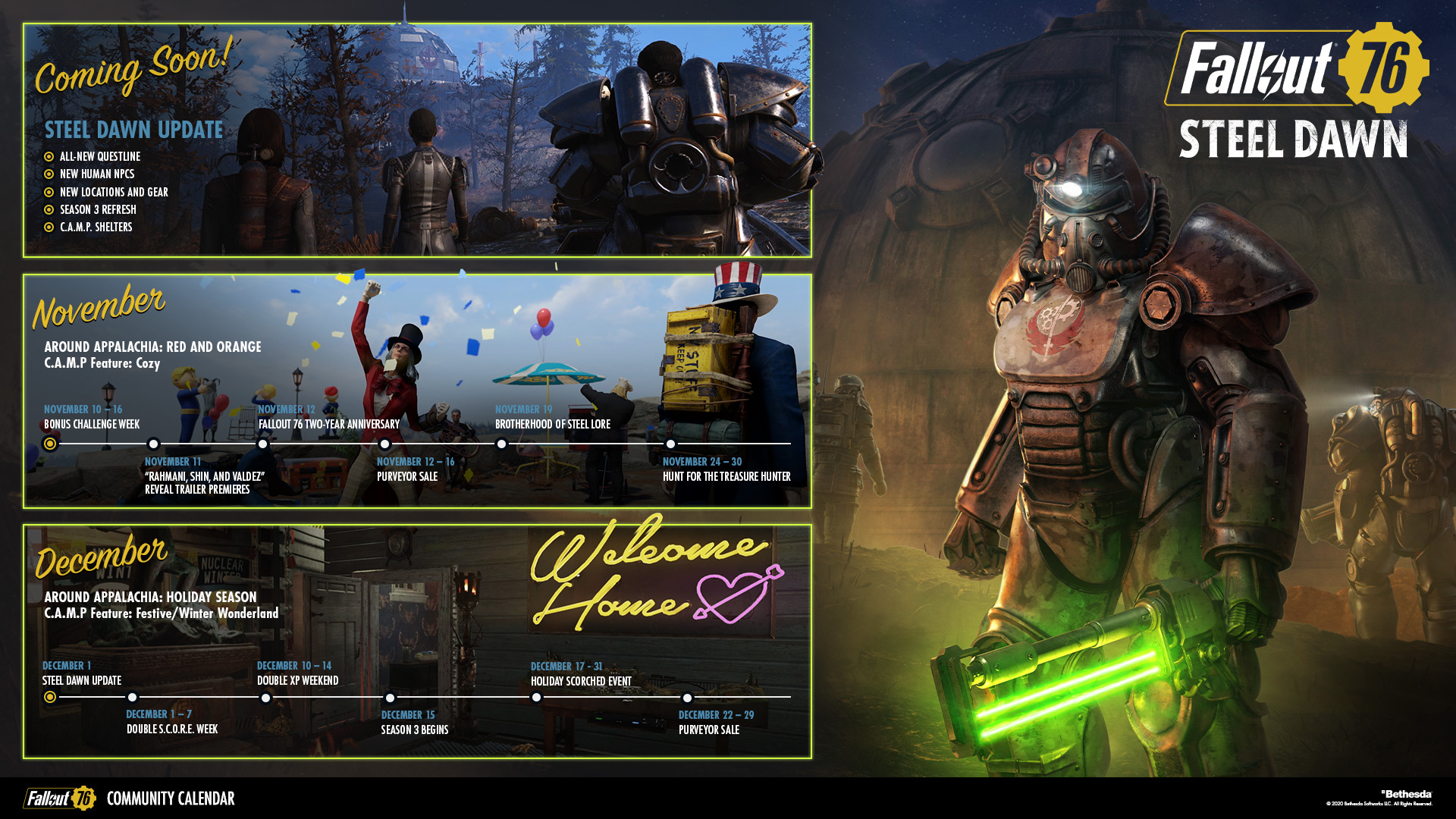 There are less than two weeks to go before Season 2 comes to a close on December 15, but that still leaves plenty of time to rank up and earn those last few rewards from the Armor Ace Scoreboard. To help you make that final push toward Rank 100, we kicked off a new Double S.C.O.R.E. event earlier this week. Lend your firepower to Armor Ace and the Power Patrol in the battle against the Red Vipers by completing challenges this week. Along the way, you will rake in twice as much S.C.O.R.E. for each of your Daily and Weekly Challenges. This event will end when the next set of Weekly Challenges rotate in at 12:00 p.m. ET on December 8, so make sure to maximize your rank-ups during the next few days!

Keep an eye on Fallout.com over the next few weeks to catch details about Season 3 and its rewards, information about our first update in 2021 —which will contain significant quality-of-life improvements— and even a look back at the game’s evolution over the course of 2020. Until next time, we’ll see you in Appalachia!