Awwwww, did you find my twitter posts? You’re so clever… here’s more samples of one of my long-time stalkers, “Shining” – a transphobic freak of a youtuber who first started bothering me in Fallout 76. 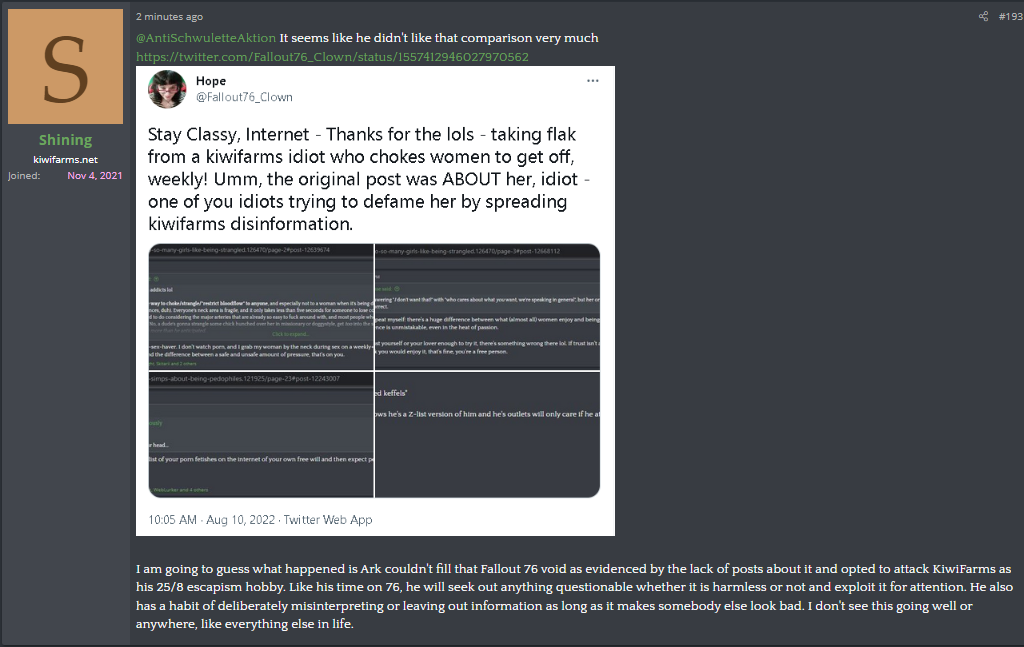 I like how he claims that *I* have a habit of ‘misinterpreting things’ or ‘leaving out information’ when him and his friends are posting lies about me on a right-wing hate site  – that also posts my home address – in an attempt to drive me off the internet, or – as was the case recently with another transgender streamer that kiwifarms doxxed and HATES (keffals) – get me and my family hurt from swatting because of these same toxic stalkers from kiwifarms?

It’s…. funny in it’s own way. So he’s sitting there talking about me, with a bunch of racists (I mean, I’ve already proven a few of them), misgendering me with a bunch of transphobic assholes who like to doxx people (and take pleasure in it, I’ve also shown posts with that) – and wants people to believe it’s NOT a racist right-wing hate site dedicated to harassing transgender people and other marginalized people?

Right – so the racists don’t like me, as per usual – I seem to have stirred up some racist and transphobic hornets already, and there’s “Shining” as per usual, with his big mouth, joining right in with the racists – while continuing to misgender me – that boy is one sick transphobe!

This #youtuber can spin it any way he wants, but I’m being harassed by right-wing #stalkers because I recorded someone drawing a #swastika in #fallout76. They posted my address on a right-wing harassment and doxxing site, and even impersonate my mother to post lies. I think it’s fair to call these people nazi liars. I had to contact the police because these people threatened to swat me, multiple times.

He continues to misgender me and has stalked me for years – and is posting on a website owned by right-wing american transphobic stalkers dedicated to harassing people until someone gets hurt.

It is a shame that google doesn’t delist this obvious doxxing site, and that Cloudflare hosts and allows them to harass people.

Here’s more from Shining Eternity, aka Shining Hero inside the Fallout 76. He’s the nasty little sex addict that no one wanted to hang around, I mean who wants to listen to him recruit skin heads for his friends bondage site in Fallout 76 Public Voice chat, or listen to his sick sexual stories for hours on end, and you can’t escape the guy – he stalks you forever.

It’s been 3 years now, and the little nazi is still posting on the nazi forum kiwifarms.

You absolutely are a liar – I have other videos which show that.

I don’t have to discredit the thread, really – MrsNekrosias and her partner are two other nazis who bothered me in game. One of them collected my doxxing info and spread it inside the game, which I also recorded.

Shining Eternity the Youtuber wants to look like the big hero – why has been stalking me and lying about me for 3 years now?

Again – I quit the game due to harassment. I set it up so I’d never be tempted to go back to that rotten game again. I got what I wanted out of it, and I’m not putting up with being harassed by the same nazis for years and years.

I will publish all public information here, as well as other places.

And yeah – you ARE missing the original context – that video you keep referring to where you think I misgendered someone. I do have a problem making out peoples voices, I can’t tell gender sometimes. I certainly don’t  hang out with the nazis and harassing shitheads who have bothered me for years, so how am I supposed to know who is transgender or not.

You people know I am transgender, and constantly mis-gender me. That is transphobic and hateful. You do it every day, while you try to convince other people to harass me. You’re cowards who want other people to do your dirty work for you.

People who help you harass me using your information are nothing better than nazi collaborators. That’s a nazi hate site.

Shining Eternity is transphobic, and a sexual sadist and stalker. He posts stalking and harassing messages on a nazi hate site dedicated to harassing and doxxing people until they are hurt by some random nazi who believes their lies, or the commit suicide.

I don’t actually take mis-gendering seriously, I mean it’s easy to make mistakes, most people just correct themselves and move on – except when it is done by a racist group of Fallout 76 players who chase me around for 3 years to make transphobic comments like this:

I’m super tired of the sexual comments, the lies, and the transphobic hatred of this youtuber known as Shining Eternity.

It’s super obvious the core group of people harassing me on the nazi hate site kiwifarms are actual nazis – Nekrosias went around with nazi symbols in his name in discord for weeks, and his wife the other doxxer is also posting.

Just a bunch of nazi whiners who got caught in one video or another and want me to suffer forever for it.

Gee good thing I’m transitioning, new name, new life, I don’t have to deal with online stuff – unless I want to go over old things, like this.

I’ll be keeping an eye on the rest of the nazis posting about me on kiwifarms.